In the wake of the 2015 attacks in Paris and San Bernardino, California, anti-Muslim sentiment has spiked. Although these sentiments manifest themselves in many ways, attacks on mosques directly take aim at religious freedom. Existing and proposed mosque sites across the country have been targeted for vandalism and other criminal acts, and there have been efforts to block or deny necessary zoning permits for the construction and expansion of other facilities. 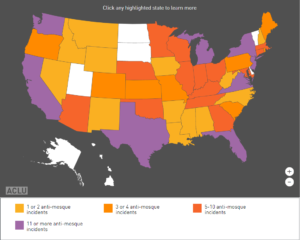