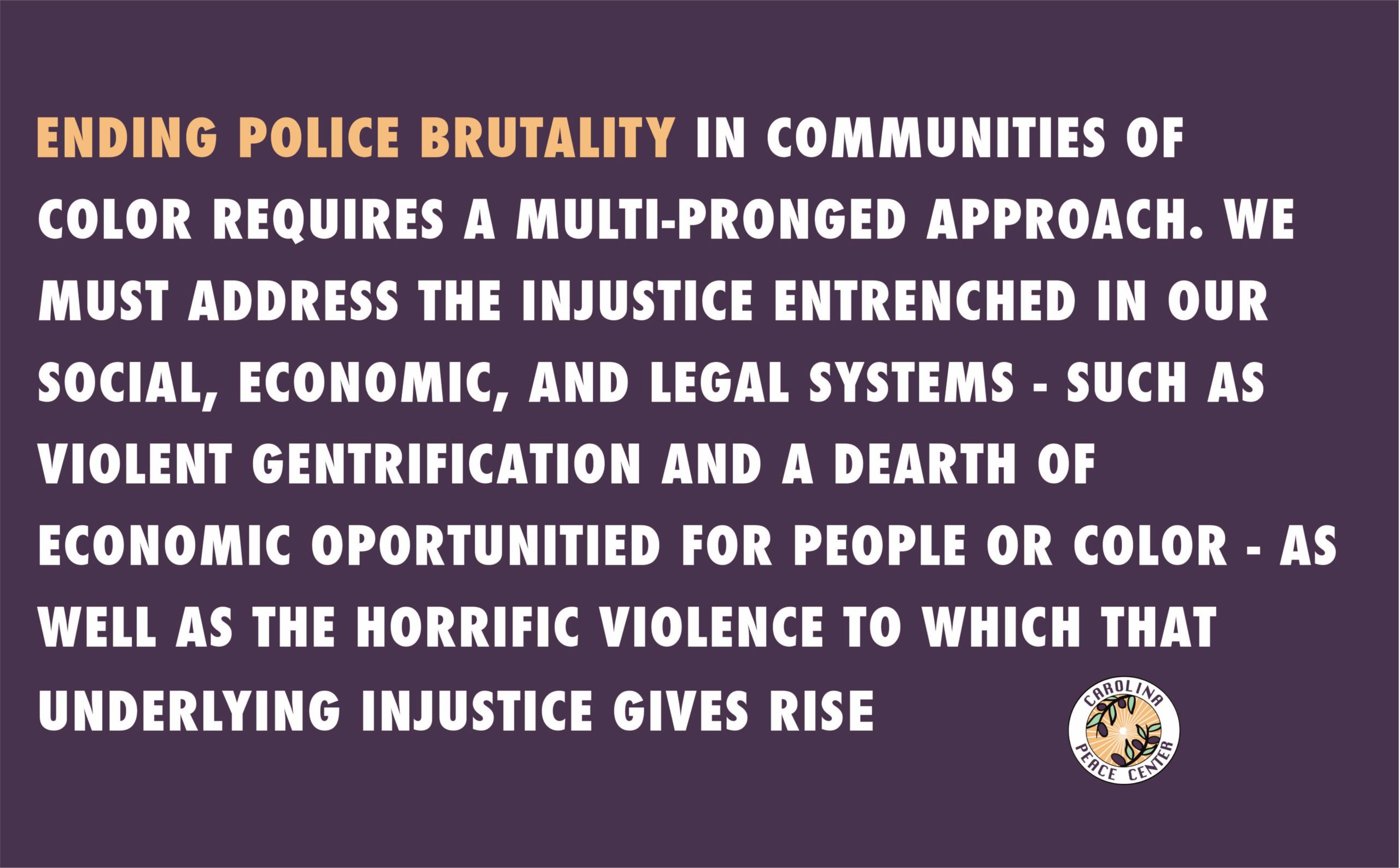 On Monday, the Carolina Peace Center, as part of a coalition of social justice groups, addressed North Carolina state and municipal leaders in response to the failure of the local, state, and federal governments to end police brutality in Black and Brown communities.

Our community is still reeling from the brutal murder of George Floyd at the hands of Minneapolis police officers, and that trauma has been compounded by the disproportionately violent response by Raleigh police to protestors on Saturday. Furthermore, this trauma is grounded in centuries of legally-sanctioned subjugation that are reflected in a long history of marginalization of communities of color in North Carolina and the nation as a whole.

In response to this chronic injustice, our coalition — made up of representatives from the Carolina Peace Center, Emancipate NC, Recidivism Reduction Educational Program Services, and Young Americans Protest — has put forward a list of demanded changes to North Carolina policy:-We demand that North Carolina state government either creates legislation, or enacts executive action, giving police oversight boards the subpoena power, in order to redistribute power between locally elected officials, law enforcement, and the people;

– We demand the immediate removal of Raleigh Police Chief Cassandra Deck-Brown, because of her silence in the face of misconduct and violence perpetrated by Raleigh police officers;

– We demand a halt to the militarization of police and the over-policing of communities of color, particularly in that no new police stations should be built in Black and Brown neighborhoods;

– We demand that the state of North Carolina puts pressure on local communities, city councils, and town councils to force police departments to require that officers must intervene when a fellow officer is using unjustified force, especially against a person who is already detained, on pain of firing; and,

– We demand investments in community-led health and safety strategies in Black and Brown communities, rather than continuing to invest in the police.

Ending police brutality in communities of color requires a multi-pronged approach. We must address the injustice entrenched in our social, economic, and legal systems – such as violent gentrification and a dearth of economic opportunities for people of color – as well as the horrific violence to which that underlying injustice gives rise.

We believe that we will accomplish this goal by lifting up the voices of people of color in peaceful protest and direct dialogue with political leaders. We condemn the use of violence and vandalism in attempting to achieve our aim of making our community safe