Skip to content
There are 48 people facing deportation today from Prairieland Detention Center, including 37 Cameroonian asylum seekers. Families say that asylum seekers were either violently forced to sign their rights away, or they haven’t been given any legal rights at all. Several people were deported back to Cameroon when this happened a few weeks ago, and many went missing while Cameroon is in a violent civil war.
THERE’S STILL TIME! AND THESE EFFORTS ARE WORKING!
Congressional Black Caucus sent a letter earlier: https://twitter.com/TheBlackCa…/status/1326200851820650496
About 10 of the asylum seekers have civil rights cases filed. Last time, some asylum seekers with pending cases were kept in the US after protest videos went viral and people called the targets demanding that the deportations stopped.
Staffers need to start work tomorrow morning with their voicemails full of demands to stop the deportation! Make calls tonight!
Call list
Rep. Van Taylor, Plano, Texas (202) 225-4201
Rep. Jackie Walorski, Indiana (202) 225-3915
Rep. Ron Wright, Texas (202) 225-2002
Rep. Tim Walberg, Michigan (202) 225-6276
For a suggested script for the call: https://hrionline.org/urgent-calls-to-prevent…/
LET’S HELP THE VULNERABLE! 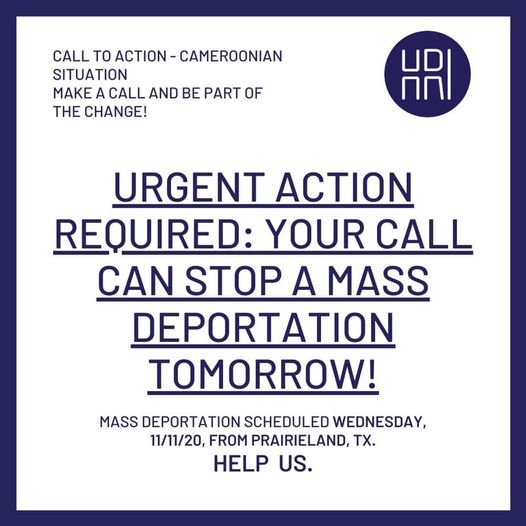