“We Need to Take Away Children”,  said US Attorney General Jeff Sessions

The inhumane US policies to separate children from their parents at the border and keeping them in horrid and abysmal conditions have been one of the darkest and gruesome mark on US soil. Those behind such atrocities must be held accountable beginning of next year on hopes that Democrats take the presidency, House and Senate in this coming election. This can not be ignored and I hope that our liberal friends and establishment don’t become complacent.

We can not become a nation of peace and justice unless we hold those responsible for breaking the law of the land and infringe the principles of human rights and violate the dignity of people. What we need to take away is racist and fascist ideology that is danger to our democracy and threat to the stability of our nation.

Stephen Miller, the chief architect of racist and neo-fascist immigration policies, former US Attorney General Jeff Sessions, former Deputy Attorney General Rod Rosenstein, former Secretary of Department of Homeland Security Kirstjen Nielsen, and others under trump administration who directed to imposed zero tolerance policy must be held accountable. A federal investigation must be launched after the election hoping that Mr. Biden gets elected.

An investigation must take place from the US Justice Department looking into trump administration’s 2018 family separation policy that was carried out by U.S. Customs and Border Protection—an agency with a long and documented history of impunity. According to none account my Immigration Impact, from detention, a father named Josue recounts when U.S. Customs and Border Protection dragged his screaming 3-year-old son away from him. Children who are suddenly separated from a parent are at greater risk of developing chronic mental health or serious physical conditions.

Citizens of Charlotte, North Carolina fought back against their police department’s collaboration with ICE through a 287(g) agreement. This program allows the Department of Homeland Security to deputize state or local law enforcement officers to perform the functions of federal immigration agents. This allows any interaction with law enforcement, including a traffic violation, to turn into potential deportation and can lead to bias-based policing.

Last year the lawyers who recently visited the facility near El Paso told The Associated Press that three girls, ages 10 to 15, said they had been taking turns watching over a sick two-year-old boy because there was no one else to look after him. When the lawyers saw the boy, he was not wearing a diaper and had wet his pants, and his shirt was smeared in mucus. They said at least 15 children at the facility had the flu, and some were kept in medical quarantine.

The children told lawyers that they were fed uncooked frozen food or rice and had gone weeks without bathing or a clean change of clothes at the facility in Clint, in the desert scrubland some 40km southeast of El Paso.

I encourage you to read the entire New Yorker piece about the conditions at Border Patrol facilities in Texas. Here is a part of the paragraph: bit.ly/2xaCOpI 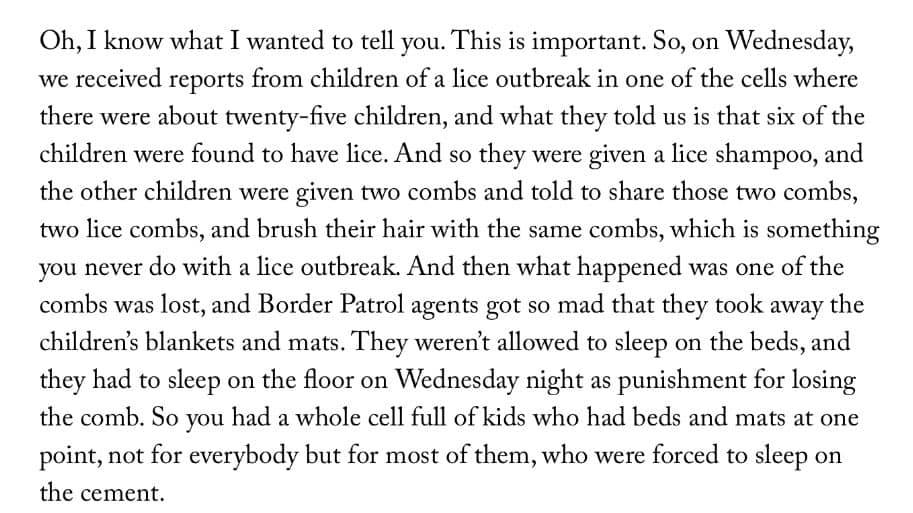 “We Need To Take Away Children”